The PS Mayflower was built in Moama on the Murray River in NSW in 1884 opposite Echuca by Wilson & Burkett for Daniel Alexander and is the oldest original paddle steamer in South Australia. 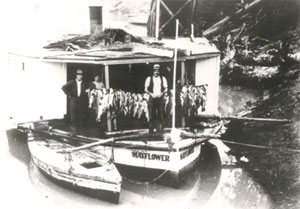 Carvel planked in red gum on steel frames, the PS Mayflower has a flat bottom and light draft enabling it to work on many of the Murray River tributaries however it was low powered and this caused problems when making headway up stream against the current.

A new vessel was launched at the building yards of Messrs. Wilson and Burkett, Echuca East, yesterday afternoon. The vessel, which was built to the order of Mr Alexander was christened the 'Mayflower'. Her length overall is 50 feet and breadth of beam 12 ft 1 in, with a depth of hold of 4 ft 8 in. The bottom planking is 2 in. redgum, and the top sides 11/2 in. kauri pine. She draws 5 in. forward, and 6 in. aft. Her carrying capacity when fitted with machinery and cabin accommodation will be 20 tons.

Daniel Alexander, a West Indian Negro, used the boat as a bottle-oh boat. She had a hard time making her way upstream against the current.

Known as 'Black Alex', a legendary figure in Murray River history, he was an impressive figure and many stories have detailed his impeccable strength while he claimed to be the greatest swearer and talker on the river.

A smash occurred on the steamer Mayflower upriver near Euston on Monday (7/7/88). The crankshaft of the engine snapped short off, rendering progress impossible. The broken shaft was at once brought to the Mildura Engineering Works, where it has been repaired.

Black Alex and his Australian wife operated the PS Mayflower where they collected bottles and carried firewood during 1890 before the craft was seized in May by the National Bank when he ran into debt. One night, Black Alex took the vessel back and made his way along the Murray to Swan Hill where he was arrested.

The vessel was taken over by his bankers and eventually sold to Billy 'Pirate' Wilson'. 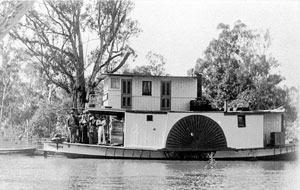 In 1900 the PS Mayflower was sold to H & A Creager, a fishing family from Renmark.

Harry Creager Senior used the vessel as a residence and fishing steamer. After his and his wife's death, the vessel became the property of two of their sons, Harry and August.

Harry and August lived on and fished from the vessel for a number of years after their marriages and brought their new brides to live on the steamer.

A top cabin was built on by August after his marriage in 1913. Hilda Creager said, "He had put odd doors either side of the cabin and August told her it didn't matter as you couldn't see both sides at once".

August and Dorothy Creager's daughter 'Dolly' was born in the top cabin on the Mayflower on the 13th July 1914.

In 1919, August purchased the Enterprise and moved his family on board that vessel however Harry and Annie Creager lived and fished from the Mayflower until his death on 21st July 1929.

In the early 1940s the vessel was sold to Norm Collins & Lyle Nickles for a short time where it was moored somewhere in the Abbottsford Bridge in the Cowanna Bend Area.

In the 1950s Captain Paddy Hogg became the new owner and in 1956, Murray River entrepreneur Alby Pointon from Mildura purchased the vessel and converted to a passenger, diesel operated vessel. Alby operated the PW Mayflower as a cruise vessel known as the 'PW Mayflower Showboat' carrying a maximum of 60 passengers.

Later in 1968 the Mayflower was sold to Tommy Barr Smith and used as a houseboat. In 1975 it was sold to R Cooke of Woodville and in 1978 Stanley and June Wilson purchased the vessel.

In 1984 Brice Douglas purchased the vessel for private use and sold the vessel to the Mannum Dock Museum through a generous donation from Pam O'Donnell and Robert O'Callaghan.

Back to the 1913 era and official recommissioning by dedicated volunteers

The PW Mayflower has been restored back to its 1913 era by a dedicated group of volunteers and was recommissioned at the Biennial 'All Steamed Up' event at Mannum on the 20th November 2016 by His Excellency the Honourable Hieu Van Le AC, Govenor of South Australia.

As Mannum is the birthplace of the paddle steamer on the Murray River, it is very exciting to now offer a regular heritage paddle wheeler cruise bi-weekly from the Mannum Dock Museum on board the oldest paddle wheeler in SA.

Our volunteers have worked tirelessly for the past 2 and a half years to bring the Mayflower back to her 1913 era when she was a commercial fishing vessel for the Creager family in Renmark.

The Mayflower will cruise every Tuesday, Thursday, Saturday and Sunday at 10.30am and 1pm for a 1.5 hour cruise and has a capacity of 25 passengers.

Tea/Coffee and bar facilities are available on board and the Captain will provide a commentary.  This cruise will take you to the Caloote Cliffs and return capturing an ever-changing river landscape for the passenger to enjoy.

Having regular weekly heritage cruises in Mannum, is an exciting time and new chapter for the Mannum Dock Museum's PW Mayflower and we welcome you to step on board next time you are in town to enjoy heriatge cruising on the magnificent Murray River.