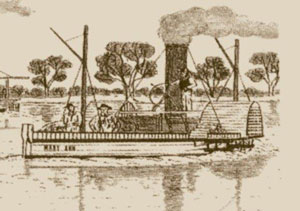 Founding father of Mannum, Captain William Richard Randell had a dream to build a steam boat in the 1850’s to transport flour from their family’s Gumeracha flour mill to the goldfields in Victoria.

With no knowledge of boats, the steamer “Mary Ann” was built by Messrs. T Geo. And W. Richard Randell at Mannum. They commenced building her in July 1852. She was 55 feet long, 9 feet beam, 7 horsepower and was built of 1.5 inch deal and drew 3 feet 1 inch, estimated cost 1,800 pounds.

Taken from ‘The Mary Ann’ from the State Library, Adelaide;

Randell’s little open boat must have been a queer looking craft.  What was most remarkable was that when he and two of his brothers began building the Mary Ann they had never seen a steamer, although as he and one of the others had been running their father’s steam-powered flour mill they knew something of steam-engines. They more or less pre-fabricated the hull then carted it across the hills from their home at Gumeracha to the Murray, putting it together near Mannum. The engine and the boiler were made for them in Adelaide. 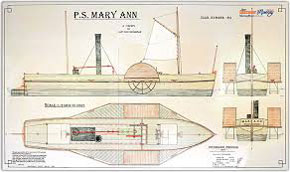 On February 19, 1853 it was reported she made her trial trip from Mannum to Wall Flat, Mr John Baker’s Station a distance of about twelve miles down stream from Mannum and subsequently left for Goolwa, owing to the Customs authorities refusing to clear her cargo at Mannum. On her arrival at that port on March 4th she was hailed with delight by the Lieutenant-Governor and party with 200 to 300 local residents and visitors from Adelaide. She was saluted by a volley of 19 guns and Messrs Winsby Bros who were building a barge for Captain Cadell, the “Eureka” hoisted a Union Jack, amalgamated with the alternate stripes of the USA flag and spangled with five stars emblematical of the five colonies of Australia. His Excellency and party were entertained on board but were unable to accept an invitation on her way up the Murray and was very nearly sunk when crossing Lake Alexandrina owing to extremely rough weather and inexperience of lake navigation. Fortunately she reached Mannum safely.

On the 25th March Captain Randell proceeded on the renowned voyage to Swan Hill or “so near to the Victorian diggings as she can safely get” – so runs her manifest.

The Mary Ann took on board about 20 tons of goods, flour, tea, sugar, tobacco etc and ascended the river about 350 miles beyond Swan Hill to Maiden’s Punt (now known as the Port of Echuca) or an estimated distance of 200 miles beyond Captain Cadell’s voyage in the “Lady Augusta” on his first trip. This voyage was reported as the Great Race between the two rival captains!

On October 22nd, 1853, the Colonial Secretary, Hon. B T Finniss wrote Mr W Randell stating that, "on the completion of the exploratory voyage of your little steamer the 'Mary Ann' as far as 'Maiden’s Punt' on the River Murray, the Lieut-Governor had the satisfaction of giving directs for payment to you of the sum of 300 pounds and to renew the congratulations of His Excellency on the public spirit which has made you the first colonist of South Australia who has placed a Colonial built steam boat and navigated the furthest on the waters of the River Murray."

The boiler is preserved at the Mannum Dock Museum. A strange-looking object, two stories are told to explain why it is oblong, not round like other boilers – one that there was no suitable iron to be had; the other that the blacksmith who made it had no idea of how to make a round one. It still carries bulges it developed at the first time it was fired, before chains were wrapped round it to keep it in something like a proper shape. Looking at it, one can readily see the reason why when steam was got up for the first time the engineer and probably everyone else on the spot, went and lay down in the bush for fear it would blow up.

It is good that this memento of the first steamer on the Murray has been preserved.

Search for the Mary Ann

Randell hoped to rescue a far larger relic of it for posterity. When he was an old man he was sometimes seen out in a small boat near Mannum wharf when the river was low, probing down in the mud with a long pole. Asked what he was doing, he laughed and said, "I’m looking for my lost youth." What he was doing was searching for the hull of the Mary Ann, which in 1855 he incorporated into the double hulled steamer Gemini. In 1865 he built the other hull into the steamer Nil Desperandum. He then used that of the Mary Ann as a barge for a few years before it was sanded at Mannum.

The old skipper failed to find the hull, which has stayed undisturbed ever since.

Once, however it was probably touched. When the steamer Mannum caught fire at Mannum in 1921 she was scuttled in order to save her. A marine diver, brought from Port Adelaide to help raise her said later that while on the river-bed he had stood on an old hull.

Rivermen guessing that this had been the remains of the Mary Ann, wished he had spoken of it at the time; they would have asked him to buoy the spot. If they were right, it is to be hoped that one day the hull will be found again, identified, raised and preserved as part of the Australian national heritage.

In June 2016 a team from the Department of Environment, Water and Natural Resources conducted a sonar search for the Mary Ann and other possible shipwrecks in Mannum.

Results from this search will be delivered in the coming months but until then the search for the elusive Mary Ann continues!

A replica display incorporating the original PS Mary Ann boiler has been created at the Mannum Dock Museum of River History at Mannum on the banks of the Murray River in South Australia.