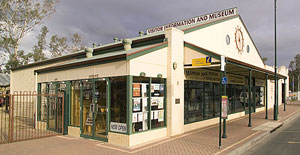 ** Temporarily Closed due to High River/Flood **

The Mannum Dock Discovery Centre is located on the banks of the River Murray in the historic river port town of Mannum, South Australia. The Museum incorporates the Paddle Steamer Marion, the PW Mayflower, the historic Randell Dry Dock, the Key Beam Engine, Arnold Art Gallery and the Mannum Visitor Information Centre

The Mannum Dock Discovery Centre is managed by the Mid Murray Maritime and Heritage Committee, a committee of the Mid Murray Council in accordance with Section 41 of the Local Government Act 1999.

The Mannum Dock Discovery Centre also has approximately 130 volunteers who play an integral role in the day to day operations of the Museum, PS Marion, PW Mayflower and Visitor Information Centre.

All members of the Mannum Dock Discovery Centre are volunteers and their role is to establish, manage and maintain the Museum. Members comprise:

Following on from the recommissioning of the PS Marion, the Mannum Dock Discovery Centre as you see it today started to take shape in the old Pit Stop Garage land site adjacent to the Randell Dry Dock. The establishment of the new look Mannum Visitor Information Centre took place in 2000 which moved from a small transportable hut adjacent to Arnold Park . The Mannum Dock Discovery Centre complex and main chamber was introduced and the new look attraction was officially opened 2001.

Over the years, the Discovery Centre has acquired a large variety of maritime artefacts, particularly those related to the history of Murray River navigation. The Discovery Centre complex was officially opened on 29 April 2001 and since the opening the Discovery Centre has expanded its exhibits providing an essential cultural foundation for the community of Mannum and an iconic visitor attraction for both the Mid Murray Council and Murray Lakes and Coorong regions.

Paddle Steamer Marion - built in 1897, the fully restored and operating paddle steamer –one of the last steam driven, wood fired, original, overnight passenger carrying side wheeler in the world. It is also significant in its technical features that represent the evolution and adaptation of river steamers to changing conditions of the river system.

Paddle Steamer Mayflower - currently under restoration to 1913 era. The PS Mayflower was built in Moama on the Murray River in NSW in 1884 opposite Echuca by Wilson & Burkett for Daniel Alexander and is the oldest original paddle steamer in South Australia. The Mannum Dock Museum purchased the Mayflower in 2014 through a generous donation by Robert O'Callaghan and Pam O'Donnell. Many identities have owned the Mayflower including the infamous Black Alexander, the Creager fishing family, Alby Pointon of Mildura and Bryce Douglas. The PS Mayflower is set for recomissioning at the All Steamed Up event in Mannum on the 19th November 2016.

PS Mary Ann boiler - the first paddle steamer in Australia and launched in Mannum in 1853 by W.Randell.

Randell Dry Dock - the heritage listed graving dock, the only one on the Murray Darling river system. Installed by W.Randell to service his growing fleet of steamers. Is one of only a few remaining in the world.

Key Beam Engine - now fully restored and operating, the engine was used to pump water from the dock (the only working one of its type in Australia).

Clayton & Shuttleworth Steam Engine - one of the oldest pieces of paddle boat machinery on the River Murray and fired the PS Murrumbidgee (only 12 years younger than the Mary Ann's boiler).

In addition to these exhibits the Mannum Dock Disvocery Centre offers:

Programs and activities include:

The nationally acclaimed Women of the River Exhibition produced to highlight the achievements of women from the mid 1800s to today featuring Margaret Court from Albury NSW, Ruby Hunter from Paringa SA, The Chaffey women from Mildura VIC, Elyne Mitchell from Corryong and Pearl Wallace the First Women to gain a Master Mariners certificate in Australia to name a few. The exhibition was produced by the Museum group at the Mannum Dock Museum and is currently on show in the Arnold Gallery and it is hoped will tour the Murray Darling Basin over the next 3 years subject to funding.

The biannual All Steamed Up event incorporating the "Mannum Freshwater Classic" and Concourse D'Elegance. Held in November, is a celebration of the largest group of working blacksmiths in South Australia, collection of classic and wooden boats and a display of working and static engines.