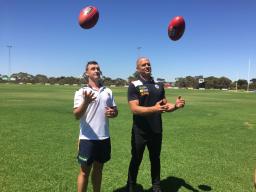 Excitement is building in Mannum as the River Murray township prepares to host the first SANFL Showdown in Round 2 of the IGA League competition on Sunday April 3.

Excitement is building in Mannum as the River Murray township prepares to host the first SANFL Showdown in Round 2 of the IGA League competition on Sunday April 3.

Adelaide will tackle Port Adelaide at the Mannum Oval as the bitter rivals square off in an SANFL blockbuster from 1.40pm.

‘’The SANFL is determined to foster its links with football fans in the country, as there are many supporters who are unable to attend SANFL matches in metropolitan areas,’’ Kelly said.

‘’We have already witnessed genuine excitement amid a carnival-type atmosphere at previous country SANFL matches and I’m sure the people of Mannum and surrounds will ensure this contest will be no exception.

‘’We are very appreciative of both Adelaide and Port Adelaide continuing to support the concept of playing an SANFL Showdown across rural South Australia.’’

The Mannum Football Club is gearing up to present the ground at a high standard. Respective club coaches, Port Adelaide’s Chad Cornes and Adelaide’s Heath Younie, inspected the surface and surrounds last week.

Chad Cornes said: “Any time you can bring the guys out into the regions is great because the players love interacting with people from the country.”

Heath Younie said: “We love seeing the money raised going back into grassroots footy and it is an ideal opportunity for the kids to see their heroes in their own backyard.

“Bringing our home match to Mannum is a great fit and we are very grateful to Port Adelaide for supporting us as well.”

At half-time of the SANFL Showdown, there will be supporter focused activations including in the IGA Family Friendly Area.

“We are thrilled to be hosting the SANFL IGA League Showdown in Mannum as it will be the second time our Club has hosted an SANFL game,” said Mannum Football Club President, Dave Schellen.

“It will be an excellent opportunity for all of our River Murray Football League youth to watch teams of a high level and we are looking forward to watching some of the AFL-listed players on our oval.”

The rivalry will continue with a rematch of the 2015 RMFL Grand Final, Mannum v Imperials, kicking off at about 10.00am. This will serve as the perfect curtain-raiser for the SANFL Showdown later in the day.

Adelaide General Manager of Football Administration Phil Harper said: “The Adelaide Football Club is pleased to once again bring this SANFL game v Port Adelaide to a regional area in Mannum, following on from games in Clare (2014) & Balaklava (2015). Our club has almost 20% (1 in 5) members residing in Regional SA and we hope that  taking these games to our people repays them in a small way for their loyalty to our club.

Our players love going to play in regional areas and are already looking forward to this game in Mannum, part of the River Murray League, who have provided our Development Squad with many players who have played for our club over the past 3 years including Sam Pfeiffer, Gene Robinson, Matthew Thompson, Justin Smart , Myles Warmington & Mick O’Malley.”

“First and foremost, we are a community club, so to be able to take SANFL football to the people of Mannum is something we are really looking forward to.

“Port Adelaide was in the region recently to visit schools and health care facilities as part of our AFL community camp so it is great that we are able to continue that connection with the area through this SANFL game against Adelaide.”

Supporters will have an opportunity to purchase one of the hottest River Murray footy tickets on offer with a Showdown VIP package for only $59, including entry to the match, a two-course luncheon in the Mannum Clubrooms featuring a Q & A session with AFL and SANFL Port Adelaide and Crows coaches, oval parking and entry to an exclusive VIP marquee to watch the games with half-time nibbles.

Children under the age of 18 years receive free admission to the blockbuster clash, whilst the cost of Adult and Concession tickets are $14 and $8 respectively. Additional details regarding ticketing will be provided at a later date.

For further information on Mannum’s Showdown at the Mannum Football Oval on Sunday 3rd April, contact the Mannum Visitor Information Centre on 85691303 or mannumvic@psmarion.com

Event info at a glance: