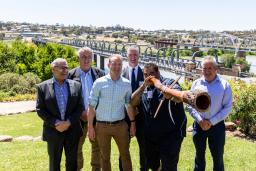 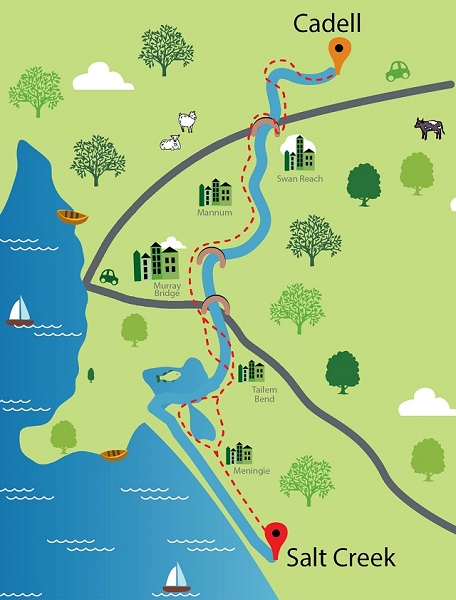 The Murray Coorong Trail Management Group has vehemently welcomed a new partnership agreement with the South Australian Government’s Department for Environment and Water to help develop the region’s 450 kilometre multi-use walking and cycling trail.
Established in 2015, the Murray Coorong Trail (MCT) project has until now, been led by three local Councils (the Rural City of Murray Bridge, Mid Murray Council and Coorong District Council) alongside the Murray River Lakes, and Coorong Tourism Alliance (MRLCTA). Now with a new State Government collaboration helping drive it forward, project leaders are confident that the 20 sections of trail will be completed sooner.
MRLC Tourism Development Manager Julie Bates and the MCT Management Group met with the Minister for Environment and Water and Department Executives at Murray Bridge today formalising the agreement.
"Having the support of Minister Speirs and the State Government is an incredible coup for this trail project and our region," Mrs Bates says.
“Once complete, the trail will span 450 kilometres across land owned and managed by three different local Councils and the State Government. Working through land-management issues, maintenance, access, safety and conservation along this length continues to be one of our greatest challenges - however having DEW involved in the project at ground-level will be vital to this happening in a more-timely manner.
"The fact is, projects of this scale in the regions need to be innovative and resourceful in terms of their delivery to make the most of our limited resources and budgets. This new partnership acknowledges this and makes a commitment by the State Government to ensure this trail is a priority.
“From today, we’re excited about working alongside the team at DEW and the State Government to bring this multi-use recreational trail to life.”
Already, there are four sections of the trail nearing completion across the three Council districts, which cumulatively stretch across about 33 kilometres along the edges of the Murray River, Lower Lakes and Coorong. These, and many of the other sections take in State Government assets such as levy banks and conservation parks, which will now be more effectively managed and developed through the new partnership.
Mrs Bates said this project added strength to the long list of major tourism developments in the region, including more than $50million in upgrades to Monarto Safari Park, The Bend Motorsport Park, Bridgeport Hotel redevelopment and Bridges Event Centre at Gifford Hill.
“Big and small tourism operators are growing in confidence, knowing that both government and private businesses are willing to invest in this region as a destination,” Mrs Bates says.
“The Murray Coorong Trail is a great example of this. The project has the potential to build the capacity of operators willing to create innovative ways to leverage eco-tourism opportunities.”
Recent figures from the 2019 National Visitor Survey reflect a phephenomenal surge in visitor nights and tourism spending in the region too.
According to the data, the MRLC recorded 334,000 visitors over the 12 months to March 2019 – a rise of 25% compared to six years earlier. Those visitors stayed an average 1.1 million nights a year in the region – up a whopping 39% from 759,000 in 2013.
Visitor expenditure also rose by an impressive 40% over the same period to $172 million annually, up from $123 million.
Minister for Environment and Water David Speirs said this was a fantastic partnership between state and local government, which will deliver a unique stretch of trail for locals and visitors to enjoy.
“I congratulate everyone involved in the project and for supporting innovation and investment in some of South Australia’s best sustainable tourism experiences,” Minister Speirs said.
“The state government is committed to creating and diversifying regional tourism opportunities in South Australia, and this is great example of activating our natural assets to enable economic development in our regions,”
“The Murray Coorong Trail is a wonderful drawcard for visitors to the region with it being less than an hour’s drive from Adelaide to many of these sections.”
Stay up to date on the project, by following the Murray Coorong Trail Facebook Page.