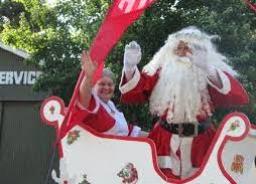 Fun and Fireworks at the Mannum Christmas Pageant

A spectacular river fireworks display will be one of the highlights at the annual Mannum Christmas Pageant this Saturday night.

The Mannum Progress Association is presenting over 70 floats, live music, marching bands and clowns in this year’s Christmas Pageant which will depart from the Horwood Bagshaw site on Adelaide Road at 6.30 p.m.

The Mannum Christmas pageant will make it’s way down the main street of Mannum concluding with a massive street party in Shearer Car Park and riverside fireworks at 9.30 p.m.

“We are thrilled with so many new floats this year from the business and community sector”, said Carol Greening Chairperson of the Mannum Progress Association.

“Creative Memories have made Noah’s Ark and a giant xmas pudding which will certainly be one of the highlights and the big blow-up netballer will be on show with the Mannum Roos Netball Club members”.

Mayor Dave Burgess is extremely proud of the communities in the Mid Murray Council region and their contribution to events each year and said, “The Mannum Christmas Pageant and Street Party is a time when so many past residents come back to see their families and enjoy family fun and Christmas cheer”.

“We even have ‘Pondi’ the giant Murray Cod making an appearance after so many years in hiding who will be accompanied by the Ngarrindjeri People walking alongside”.

The Mannum Christmas Pageant will be held on Saturday 5th December and depart at 6.30 p.m. from Horwood Bagshaw on Adelaide Road through Mannum’s Main Street followed by the street Christmas party filled with live entertainment and the river fireworks display at 9.30 p.m.

For further information contact the Mannum Visitor Information Centre on 85691303.